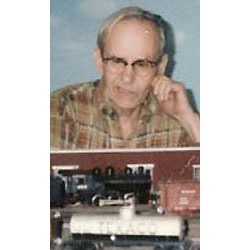 He built his first scale model locomotive in 1932 and after that time he had an active interest in one-quarter inch scale railroading. The first engine built for a customer, the Chicago Museum of Science and Industry, who had just been enhancing the operating layout and displaying the highly detailed historic models of the Chicago Great Western Railroad.

From 1935-1936 he worked for W .K. Walthers, in Milwaukee, Wisconsin, where Walthers’ first O-gauge material was marketed. Then in 1936-1937 he went to the Scale Model Railways, Huntington, Indiana. In 1940-1941 he developed the Saginaw line of Pennsylvania Railroad engines for the Saginaw Pattern & Manufacturing Company, Saginaw, Michigan.

From a beginning in the late 1940’s, Bill was president, mechanical draftsman, superintendent, and the entire labor force of the Lenoir Locomotive Works, located in Tampa, Florida. Bill continued building locomotives until his retirement in 1987. All of his locomotives were built from the same blueprints used to build the real locomotives by such companies as Baldwin, Lima, Alco and other locomotive builders. At his peak, Bill could turn out a locomotive in five or six weeks. In his early years, Bill scratch built all of the parts needed for an engine. Later, as good quality castings became available, he used commercial parts to speed construction. He could machine anything he needed in his well-equipped shop, often supplying parts to other manufacturers such as Lobaugh or Athearn.

It has been said the Bill Lenoir was a true gentleman. Very quiet and unassuming to the point of being shy, Bill never bragged. He didn’t have to—his work did it for him. He had a lot of friends around the country and many of the Scalers were sorry when he retired, but that time comes for everyone. In Bill’s case, his legacy will always remain in the wonderful historic models he created. Today his models can be found in both private collections and in museums.