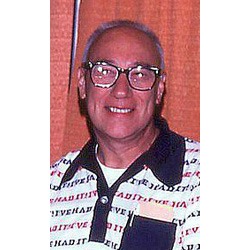 Bill Wolfer was an O scale custom builder, model manufacturer and mail order re-seller. Bill was a police detective in Philadelphia for almost 30 years. He became a part-time O scale dealer in the mid 1950’s. He ran “Bill’s Railroad Shop” from his home in Penna, then in California and later, on a reduced basis, in Ohio.

In the mid 1970’s he produced about 100 PRR GG1’s with imported body shells and his own drives. He also built smaller numbers of PRR FF-2s, E-33s and E-44s, later selling the patterns to Ed Duddy. Bill also produced about fifty 60′ auto-parts boxcars (a late 1960’s prototype similar in some ways to the current AtlasO car).

Bill’s specialty was passenger trains; the classic named trains of the 40s and fifties. He researched every detail including interiors. And they were real beauties. Most had brass sides, wood roofs and were illuminated to show off the accurate interiors. For some customers he included a trademark passenger somewhere in each train, a person sized rabbit! Bill also built the huge passenger terminal at the Citrus Empire Model Railroad club in Orange, California where his passenger trains were always a hit.

A real gentleman and genuine booster of O scale, Bill was a lot of fun to be around. Bob Courtney/Joe Gianovario – OST