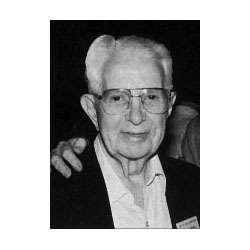 1997 marked the 50th year of continuous operation for one of O Scales foremost institutions: Central Locomotive Works. CLW was unique in several ways. Throughout all those years, just one man – Bob Smith, operated CLW. Even more remarkable, in contrast to the few other firms that go back that far, Bob Smith as CLW was still doing exactly the same thing he did 50 years previously – making the highest quality O Scale locomotive kits. Over those 50 years, Bob developed, engineered, and introduced significant innovations and advanced technologies that were rapidly adopted by the entire model railroad industry.

Bob’s model railroad manufacturing career began in 1940 when he machined drivers on a second hand lathe. He became quite well known in the Chicago model community for his custom machine work. This led to a commission by ALCO to custom make a model of the brand new PA diesel. Central Locomotive Works got its start when Bob decided to produce kits of the PA diesel. Next came power trucks. Bob’s redesign of diesel mechanisms included a chassis mounted motor with a transfer box on the end axle transmitting power to the wheels. This is the pattern that has been followed by other manufactures ever since, and is just one example of Bob’s many innovations copied throughout the model railroad industry. In 1950, Central Loco Works absorbed the Lenoir/Saginaw line of locomotive kits, and then the ScaleCraft O Scale line in 1951.

The famous PS-4 locomotive kit began with a request for a custom made model. Other O Scalers heard of the project and also asked for a model. The decision was made to make patterns and use lost-wax technique to produce the many detail parts for the PS-4. Thus was born what has become perhaps the finest steam engine kit ever available to model railroaders.

Bob moved to Florida in 1956. He later went to work at the model shop at the RCA computer plant near West Palm Beach. His alertness to new developments led him to design his own gearboxes out of an extremely tough, wear resistant but self-lubricating plastic. Bob, in the CLW shop behind his garage, carefully assembled every gearbox. Bob’s later diesel kits introduced “triple etching” for body parts. Another innovation was tabs on the etchings to help the modeler fit parts together in exact alignment.

Bob Smith’s engineering excellence and innovations changed and improved the product lines of many other model manufactures in all scales. Bob was one of the first inductees to the O Scale Hall of Fame. Over 50 years many hundreds of O Scale modelers were grateful to Bob for enabling them to be able to say with pride, “I built it.”

Central Locomotive Works was sold in 1999 to Lou and Bette Houlemarde due to Bob’s declining health.