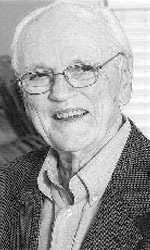 Dr. Howard Blackburn, (deceased 2007) was an O Scale modeler with an intense interest in passenger cars and traction. He was instrumental in starting the O Scale National with Vane Jones. Dr. Blackburn was also involved in the founding of the Illinois Railway Museum, the Indiana Transportation museum and the Indiana Garden Railroad Club. He was also a member of the National Railway Historical Society. Dr. Blackburn was internationally known for his railway photography and videography.