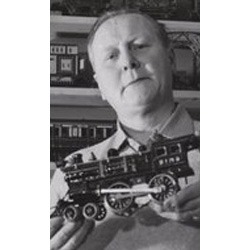 Ed Alexander was an agent for custom builders Fred Icken, Paul Egolf and others in the 1920s. He promoted O scale at the 1933-34 Chicago World’s Fair where he designed an O scale layout for the C&O RR display. Ed was one of the first to establish a mail-order company specializing in O scale locomotives, cars, structures and parts. Kits ranged from a NYC #999 4-4-0 to the famed Alexander PRR GG1. Ed also produced a set of cast aluminum PRR heavyweight passenger cars marketed under the E.P. Alexander label.

Ed was also a prolific author writing in many model magazines and authored many books about prototype railroads including (but not limited to): American Locomotives in 1941; The Pennsylvania Railroad, a Pictorial History in 1947; The Collector’s Book of the Locomotive in 1966, and Down at the Depot; American Railroad Stations from 1831 to 1920 in 1970. As one can see, Ed was not one to rest on his laurels.

Ed is also considered to be the “father” of the Train Collectors Association. The group that would eventually incorporate as the TCA in 1957 first met at Ed’s residence in late 1954. Ed held TCA Honorary Charter Member number 4. Ed was inducted into the O Scale Hall of Fame in 2000 at New Orleans.