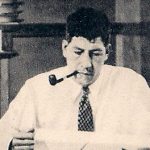 Elliott Donnelley was a third generation Chicago printer (R.R. Donnelley & Sons Company) who lived in Lake Forest from his boyhood until his death in 1975. Donnelley was a life long railfan both in prototype and models. His story about Scale Craft starts in 1933 in Chicago, Illinois. Scale Craft was started by Clifford H. Smith as Scale Models, Inc. That history states that Elliott Donnelley purchased the company in 1936 from Clifford Smith. The library at Lake Forest College has a catalogue that is not marked, and the date of issue is not known at this time. In that catalogue, Elliott Donnelley announces that he is the new president, and Clifford Smith is still on the Board of Directors. It’s possible that Elliott started working for, or with Clifford in 1933, and did not purchase the business outright at that time. According to a ca. 1938 brochure, and his renamed Scale-Craft brand operated in Chicago, Libertyville and Round Lake until the 1950s making O and OO scale models.

Unlike other model manufacturers, Scale Craft models came with large scale plans along with the instructions and even signage. He was a very good writer as well and wrote many still-notable educational and enjoyable articles on modeling for his catalogs and in Scale-Craft’s newsletter, Blow Smoke.

Their catalogs also had more information than just product, and covered everything about planning your layout, bench work, scenery, wiring, and running your model railroad. The amount of art work and layout work could not have been accomplished by many other manufacturers

The Scale-Craft 1¼” (‘O’) scale locomotive frames utilized a patented two piece bronze casting with milled seats for the driver axles and 3/16″ wide axle bearings. Drive wheels were made of unchilled cast gray iron and were 1⅝” in diameter. Side rods were cast bronze, hand fitted, and dull nickeled. They utilized a double steel worm and fibre worm gear mounted in a heavy cast bronze bracket for the locomotive transmission. Motors were either standard 12 volt DC or 12-18 volt AC. The superstructure was rolled #20 gauge sheet brass with cast bronze fittings. The recommended minimum track curve radius was 3′ for passenger locos and 4′ for freight locos. Solid steel or brass rail was recommended. Outside third rail was standard, but 2-rail systems were also available.

A 1934 Scale-Models catalogue supplement issued in November touted the new bronze boiler casting and cast aluminum tender for the Scale-Craft Hudson. The new locomotive casting was a single piece that included the boiler, fire-box, cab, running boards, stack, sand and steam domes. It was believed that by incorporating each of these components into the single casting it would shorten build times and permit a level of detail never achieved previously in a scale model, such as the NYC Hudson. A Scale-Craft K4s pulled the ‘Broadway Limited’ scale model train at the Chicago World’s Fair Century of Progress Exposition of 1933. It ran for 150 days, 12 hours a day, 27 miles per day, more than 4,000 miles total, without a need for a single repair. With the exception of motor bearings, this was a stock Scale-Craft model.

The Scale-Craft ‘O’ scale freight car kits included quite a few detail parts, and even paint. Unlike some other manufacturers of freight kits, Scale-Craft included complete trucks, fully assembled and ready to attach and run with each car. Holes in parts were all pre-drilled, and complete machining of the cast parts was performed so that the builder only had to worry about assembly. Fidelity to scale reproduction was done with emphasis.

Scale-Craft remained in the Chicago area until the 1950’s. In 1951, the ‘O’ gauge car side of the Scale-Craft line was acquired by Thomas Industries who continued manufacture into the early 1960’s, while Central Locomotive Works of Chicago, IL acquired the ‘O’ scale line of locomotives.