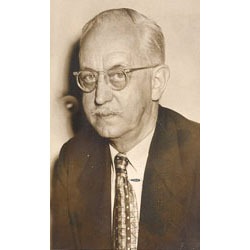 Frank Ellison was an O scale model railroader with no equal. His approach to model railroading was unique. He treated the layout as a stage and the trains as actors. He wrote articles about the roles the trains played on the stage. Ellison was one of the first to describe a card order system in order to “direct” his trains. Throughout his modeling career Ellison authored 116 articles about model railroading and inspired generations of modelers to come after him. Although he was first published in 1940, his seminal work was “The Art of Model Railroading” originally published in 1944 and reprinted in 1965 by O Scale Hall of Fame Model Railroader magazine.

Ellison was not just a theoretician. He used the systems he described. His O scale railroad, The Delta Lines, was constructed to facilitate operation, and, I seem to recall it was outside third rail.

One of Ellison’s legacies to the hobby is the scale mile or “smile” as he termed it. The length of a smile depended on the speed of the “fast” clock used. A train running at a scale 60 mph covers a scale mile in one real minute. It travels a smile in one “fast clock minute”. Divide a scale mile by the clock ratio to get the length of a smile. Ellison liked to use the “five minute hour” or a 12x fast clock. Ellison called his model mileposts “smileposts.”

Frank was elected to the O Scale Hall of Fame in 1995 at the O Scale National Convention in Teaneck, New Jersey.