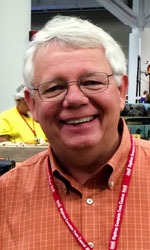 Jim Canter is OSK #4. Since 2001, he has hosted the annual Indy O Scale fall meets, several of which have been designated as O Scale National Conventions. He is a manufacturer of O Scale parts and tools. Jim has been a leader in developing and publicizing Proto 48, including constructing a modular Proto 48 layout. He serves on the Board of O Scale Kings and of the Nickel Plate Historical and Technical Society and has headed several national conventions for the Society. He has constructed a large Proto 48 layout.