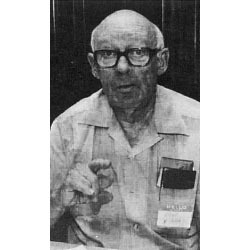 Jerry White grew up in Keene, NH, which was serviced by the Boston and Maine railroad. While he was a high school student in the mid-1930’s he built his first model, the B&M railcar that provided local passenger service. The engineer was so impressed he bought it from Jerry. Thus started Jerry’s career in railroad model building.

After graduation he developed and manufactured 2-8-0 and a 4-6-0 O scale locomotive kits.

Attempts at sharing equipment with other modelers led to his strong interest in standards in order to facilitate inter-operability. He was an early member of the NMRA in order to support its standards efforts. He served as technical chairman of the NMRA for four years, and is an NMRA Master Model Railroader.

Prior to World War II he worked for Rollin J. Lobaugh, one of the early manufacturers of O scale locomotives and rolling stock. After WW II he started Superior Models in Redwood City, CA, where he scratch built models of steam locomotives in TT, HO, OO, S, and O scale. He also scratch built some diesel locomotives, and many passenger cars including complete trains such as the Western Pacific’s California Zephyr and the New York Central’s Mercury.

In the 1950s Jerry designed and manufactured HO scale models of the PS-1 boxcar under the name of Kurtz Kraft. The bodies were injection molded, had separate free standing ladders, hand grabs, etc. The kits were available painted and lettered for several road names.

Over the years, he concentrated his model building activities on O scale, which was his personal favorite. He also developed a lively drive systems business as people who purchased imported brass locomotives discovered they left a lot to be desired in both smooth running and pulling power. Today an import locomotive with a Jerry White drive commands a premium price.