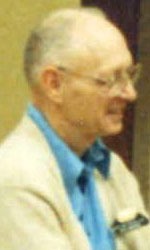 Richard M. “Rich” Wagner was born in Cincinnati, Ohio in 1914. He graduated from Hughes High School and attended the University of Cincinnati. He began making scale models at age 16. He served during World War II in North Africa, France, Italy, and Germany as a First Lieutenant in a railway operating battalion.

Rich began custom-building O scale traction models and a marketing a wide variety of mechanisms and detail parts beginning after the war, founding the Wagner Car Company. His address, 59 Euclid Avenue, Wyoming (a Cincinnati suburb), became well known among trolley modelers nationwide. Rich was a gifted designer, machinist, and photographer, and was known as a meticulous craftsman, even a perfectionist, throughout his life. Many of his O scale trolley power trucks are still giving dependable service today.

Rich married his wife Birdella (Birdie) in 1942, and she became an equal partner in the business. She founded Trolley Talk, a national magazine for trolley modelers; he served as its technical editor. Along with Roy Wright, the couple published a well-regarded multi-volume history of streetcars and inclines in Cincinnati, as well as other books that are still in demand today.

Rich passed away in 1990, survived by his wife and a daughter, Ronda, who is a retired Army chaplain (United Methodist). The Wagner Car Company’s line of power trucks and detail parts was sold to The Current Line. Birdie continued to publish Trolley Talk for a time, then passed it along to others. She passed away in 2000. Ronda continues to reside in Wyoming.