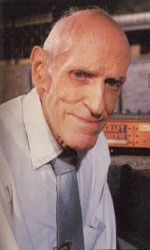 “In April 1934, Bob Wagner applied for membership in the New York Society of Model Engineers (NYSME). (Note: The New York Society of Model Engineers was incorporated in 1926 and has been well known in the modeling community for their size and various activities.). On his application it reads that he was interested in ship and railroad models, and his occupation at the time was that of student. This young man was definitely exposed to some of the finest model builders of the time – Ickens, Alexander, and Joe Fisher, all members of the Society, and some less well-known modelers such as George Brunges, who showed Bob some amazing woodworking techniques.

In May 1935, he was approved for regular membership. This started a remarkable period in his model building career, over which he produced his now famous private road billboard reefers. Bob’s true love were the billboard reefers – whether 34’, 36’, or his well-known 40’ reefers. These beautiful advertisements, which are a part of a most colorful period of advertising on American railroads, were cut out in the mid-30’s because of unfair business practice in advertising deemed by the ICC. At that time, there were no color photographs of them. But bob was undaunted by this.

From his correspondence that I can trace, we know he began writing letters to the packing companies and other companies that owned the private reefers as early as 1932. He once told me he so thoroughly enjoyed writing and obtaining information from the railroads that his father complained to his mother one day about their crazy son who had requested drawings from the UP railroad for the M4000. Low and behold, a small tractor trailer appeared in front of his house in Bay Ridge and a tube was unloaded and placed on their front porch. Enclosed was a full scale erection drawing of the M4000 which the railroad had sent to him. Not only did he get the drawings from the companies that assembled the cars, he wrote to the packing companies, breweries and other concerns that had these reefers. He obtained lettering diagrams and the color numbers from these companies, as well as color chips from Dupont. But he wasn’t satisfied. He also went out and obtained individual packaging from these items to get an absolute color match.

He accumulated over 300 drawings, and even more photographs. He was known to have such an extensive library on privately owned reefers that Hormel wrote to him in later years asking for information on their history.

His obsession for detail led him to research each car to find out which foundry had forged the side frames and trucks for each reefer and which company had built the underframes, then wrote to them requesting detailed drawings, and again received them directly from each company. He scaled down the drawings to 17/64s which was the common building practice of the time.

He made his own positive molds, then went to a casting company on Canal Street in New York and had bronze castings made of the side frames, bolsters, and end sills. He made his own axles to fit the side frames, and obtained 33” metal wheels from Lobough. Every car he built had metal underframes as well, which he constructed out of 44 pieces of brass shaped on a small brake. The reason he used brass was the result of an experience at the Society when one of his cars was involved in a serious train wreck after a wood screw holding the coupler fell out. After that, he would only use metal frames and Monarch operating couplers.

He next turned his attention to the body of the car. He built a wooden frame to which he applied a thin wooden skin painted the basic color. It was then he did his most remarkable work – hand lettering and drawing each billboard. If you were fortunate enough to have attended his lecture at the 1995 O Scale National Convention, you learned of his technique. He first traced lettering and trademarks on tracing paper. Next, after chalking the back of the tracing paper, he transferred the tracings to the car. Finally he painted over the outlines, then filled in the lettering and trademarks. He worked with a 5/0 brush, fine point drafting pens, and at times even used a strand of his own hair as a fine brush. “The lion’s mane on the Monarch Foods car is an example of the detail he achieved with this technique.

Bob built 42-1/2 reefers over his lifetime – that half being a two axle Hormel reefer – the only one of its type in the US. He completed his first in May 1940, and his last, in May 1998. Before the NMRA came into existence, the best modeling contest to win in the US was that of the New York Society of Engineers. Bob won the Best of Show with his reefers so many times he withdrew from competition to open it up to other modelers, fully knowing that if he ever entered again he would win. This quie man’s reefers appeared on the cover of t Model Railroader in the 50s, in Life magazine, in Model Railroad Craftsman, on the cover of a NYSME show bulletin and were featured in OGR run 141. Considering that these cars vanished, we are truly lucky to have Bob’s renditions of these amazing reefers.

I met my long-time friend while I was a junior member of the New York Society of Model Engineers. Upon is death, his collection of Billboard Reefers, and the vast information that he had accumulated on these cars, came into my hands. I wanted to share with the railroading community this vast collection created by Bob, and to give him the recognition he so truly deserved. I looked for a company that would in turn built these reefers with the same integrity and attention to detail that Bob devoted to the models that he had researched, hand-built and painted over his lifetime.

Atlas, upon entering into the O Scale market, with its track system, SW8s and SW9s, was besieged with request for Steam Era type cars. Tom Haedrich and Jim Weaver were looking for the right car, not previously produced, which would best suit the O scale market. Atlas’ desire to give the O Scale market a car that would rival the brass markets for their quality and detail, and paint schemes that had never been even attempted in the other scales, was a perfect match for my hopes. With the vast amount of information I made available to them – the actual blue prints the colorized photos that Bob had taken and painted himself, and his hand-painted reefers, Atlas had the details they needed to produce the perfect car they were looking for. Atlas management saw the opportunity to build exact replicas of the cars that were the most colorful freight ever manufactured, and which had enriched this era of railroading…through them, the wok of a talented and wonderful man, Bob Wagner, lives on.”

Bob worked for Esso as a professional model builder and staff designer after he completed high school. A confirmed bachelor, who was a health food fanatic, Bob had an interest in shipping companies and ship lines. He also enjoyed classical music, and hated television. Like most model railroaders, Bob was a rail fan and took many railroad trips. Besides his avid interest in model trains, he was a creative and interesting guy.

(Taken from “Those Amazing Reefers – And Their Creator” from the O Gauge Railroading – October 2001, Run 182 and an bit from “The Atlas O, LLC 40’ Wood Reefer Collector’s Guide”)