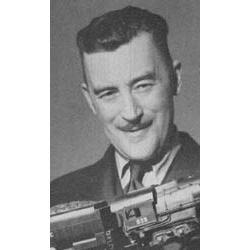 Rollin Lobaugh was one of the pillars of the O scale community. He started his model business in 1931. By 1941 Lobaugh offered an astounding 11 locomotive kits ranging from a 4-4-0 to a 4-6-6-4 Challenger and just about every wheel arrangement in between. Lobaugh also offered over 120 freight car kits. Lobaugh offered a “Warrantee of Fine Craftsmanship: Any purchaser of Lobaugh equipment who is not satisfied will, upon return of the equipment within thirty days, receive a refund of the full purchase price, plus a refund of all transportation costs paid by the purchaser.” Mr. Lobaugh liked to boast that no one had ever taken him up on his offer.

Compared to today’s imports many Lobaugh locomotives may seem crude, and they were in regard to fine details, but they were mechanical masterpieces. Many are still running today. Lobaugh produced models from 1931 through 1965, first under Mr Lobaugh himself and then under Earl Allison, the chief engineer and designer after Mr. Lobaugh’s death. Since then the Lobaugh line has passed through many hands over the years, getting split here and there. It currently is divided among three concerns, Locomotive Workshop, Trackside Specialties and Stevenson Preservation Lines. This last company` probably has the most extensive collection and has resurrected the Lobaugh SP Mikado kit.

Rollin Lobaugh was elected to the O Scale Hall of Fame in 1995 at the O nationals in New Jersey. In 1996, he was enrolled in the Model Railroad Industry Association (MRIA) Hall of Fame.

Though long gone, Lobaugh remains a pillar of the O scale community both in material presence and in spirit.