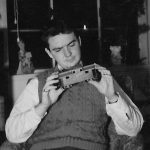 Ted was an O Scaler from the time he got out of the Army Air Force after WWII to the time of his passing. He was both a modeler and a long-time participant in the model industry.
After WWII, Ted was a draftsman/industrial designer for Piaseki Helicopter in Philadelphia. Ted later became the industrial artist for the old Atlas Tool Company, now Atlas Model Railroad Company. He did a great deal of the research and renditions for the old Atlas Roco O Scale line, as well as Atlas projects in other scales. The Atlas Roco line was arguably the first comprehensive, ready-to-run, full range of products offered in O Scale in the post WWII era, and did much to introduce the 1970s modeler to the scale.

Unlike their contemporary competitor, AHM, who also introduced a ready-to-run range at the time, the Atlas offerings (thanks to Ted’s adherence to prototype) were not solely generic models, but most followed prototypes, such as the PRR X43c boxcar, the G31e gondola, an International Car extended vision caboose, and the Bessemer & Lake Erie’s ore car. The F9a in that range was at least the inspiration if not the progenitor of the comprehensive F-unit range later produced by P&D.

Ted also did artwork for Max Gray, both for the brass importing business and the decal side, the later Champion Decals. One of the most enduring images in the scale, the proud hobbiest (complete with jacket and pipe) admiring a Max Gray model that featured in advertisements of the era, was Ted’s creation.
In addition, he and John Armstrong did the famous Atlas “snap-track” design books, getting novices introduced to the hobby. Ted was somewhat the quiet partner in a long association with John. He did the art for John’s earlier layout design books, including the trackplanner’s bible, “Trackplanning for Realistic Operation”. He also did drawings and art for several of John’s articles and clinics.He was one of the founding members of what is now the Capitol Area O Scalers, hosts of the 1981, 2004, and 2018 O Scale National Conventions.He wrote several articles, including an Athearn reefer detailing article, first appearing in Model Railroader (MR) in March, 1956. That article was an example of his love for building the best and most accurate he could build; an adherence to reality that he advocated in his models just as he did in his designing. That article was reprinted by Reynolds, and included in every Athearn reefer kit they sold. His O Scale PRR E6 Atlantic won an MR “Model of the Month” citation, and several of his other models, such as a B&O Tenwheeler, were featured in the pages of the modeling press.He also was an excellent railroad historian and an active member of the PRRTHS (Pennsylvania Railroad Technical and Historical Society).

Ted is perhaps not well-known to many simply because his work for such luminaries of the scale as Atlas, Max Gray, Champ Decal, and his good friend John Armstrong was “behind the scenes”. However, many of the images we remember and the models we know can follow their lineage back to one place, Ted’s drawing board.
While perhaps the more unknown partner of the Armstrong/Stepek track planning books, coupled with the work for Atlas on the original O Scale project, Max Gray, and others, he quietly contributed much to guiding the novice hobbyist on his way to becoming an accomplished modeler.