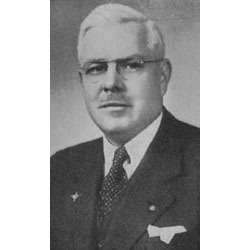 Manufacturer and distributor of model railroad kits, accessories, and products beginning in 1931 with O scale and now encompassing all popular scales. Published his first Walthers Catalog in 1932. Introduced his first O scale car kits in 1933. Added an O scale steam locomotive in 1934. Walthers was known for a number of “firsts,” such as: accurate lettering data, twin solenoid switch machines, two-rail signalling circuits and much more.

Walthers was well-known for his humorous ads run during World War II. Some feel he personally kept model railroading alive despite the wartime restrictions on materials used in model railroading. After the war, Walthers introduced his “Polydrive” system for powering steam locomotives. It made every axle a geared driver. It never really caught on and was gone by the late 1950’s. However, Walthers extensive line of O scale passengers are still sought after today. Bill retired from the business in 1958 and turned it over to his son Bruce.